Counterfeit Detection: So Many Alterations, So Little Time

PMG graders use several techniques and reference materials
to prove a note was altered.

As many collectors know, PMG uses a vast library of reference materials and resources when researching and grading notes. While the main reference books are the Standard Catalogs of World Paper Money (Pick) books for world notes and Paper Money of the United States by Arthur L. and Ira S. Friedberg, sometimes more complete information for a particular note type can be found in other resources — sometimes down to specific dates and serial number ranges. When the authenticity of a note is called into question, graders often can use such research materials to help determine if the note in question even fits the parameters of the printed reference books. Such was the case with a note that was recently submitted and deemed altered.

The note pictured above was submitted as a Burmese Pick#5Ac. Some collectors may recognize that it shares a design with India Pick#A10; in fact, up until 1918, the Indian government used the same note design for multiple cities of issue, with small letters added to indicate which location was the issuing branch. In this case, the “R” would indicate that this note was issued in Rangoon, Burma.

The first red flag that the graders noticed about this note was that its date, 8 August 1919, falls after Pick’s cutoff date of 20 November 1918 for this particular catalog number. While the date ranges in Pick are sometimes incomplete, this particular date also falls after the cutoff date for the use of these branch letters. The latter discrepancy alone was enough to prompt the graders to look a bit more closely at this note, as it would be relatively easy to later add a letter to an India Pick#A10v note, all of which were issued without circle letters. Because the Burmese Pick#A5c is worth much more, this would be a quick way for counterfeiters to increase their note’s value.

Looking at the “R” under magnification shows that its borders are a little bit sloppier than we would expect. Unfortunately, however, this is not distinctive enough to say for certain whether the letter is original. More telling is the serial number prefix. According to the Revised Standard Reference Guide to Indian Paper Money, one of the possible prefixes for this note type is QD, which is the prefix on this note — or is it?

Apparently, our counterfeiters checked the same book. When choosing a note to alter, they found an Indian one with a serial number prefix of OD (which is one of the possible serial number prefixes for Pick #A10v) and, knowing that OD was not a prefix used in these Burmese notes, added a “tail” to the bottom of the O to make it a Q. To be sure, this would have made the alteration somewhat more believable. However, there was a slight problem: They used the wrong font.

Notice that the image from a genuine Burmese note includes a small flourish on the tail of its Q, whereas the note in question does not. Furthermore, upon very close inspection, one can just make out a line across the bottom of the O, above where the ink was added.

At this point, our graders would have had enough information to support calling this note altered. However, there was one more issue with this note. This is where our counterfeiters flew a bit too close to the sun: In addition to altering the place of issue, they also decided that they wanted to have a note with mismatched serial numbers, which would add yet more rarity and value to the piece. 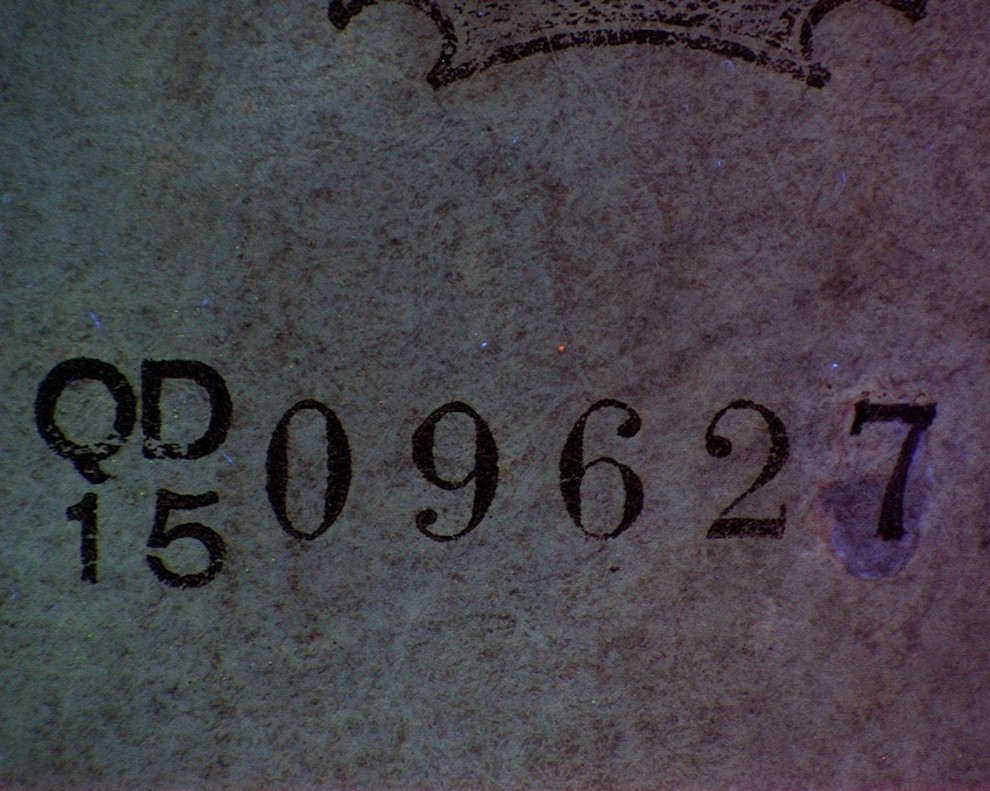 The serial numbers near the bottom of the note seen
under multiple light sources.

Looking at the serial number under specialized light sources, the alteration becomes obvious. We can clearly see where an 8 was removed at the end of the serial number, with a 7 stamped over it to create a mismatched serial number; the disturbed area has a strong reaction under multiple light sources. Moreover, these reactions are present on both of the altered serial numbers, successfully eliminating any possibility that this was a random coincidence or the result of environmental damage. Also, if one looks carefully at the prefix, it looks like the tail of the Q has a lighter reaction than the rest of the black serial number ink, further confirming that a different ink was added in that area.

It is important for collectors to do their research when purchasing banknotes; however, for those without a personal library of numismatic references, PMG graders will always endeavor to give notes the careful research that they require. As always, any note encapsulated by PMG is backed by our PMG Guarantee of grade and authenticity.

If you’d like to see more articles about paper money, sign up for free to become a member of the PMG Collector’s Society and then choose the PMG and related e-newsletters to be delivered to your inbox.