There are many ways to collect paper money. The simplest way is to save notes found in circulation, and this is how many of the greatest collectors got their start.

Some beginners, for example, attempt to complete a set of $1 Federal Reserve Notes (FRNs) from circulation by looking for one note of each combination of Federal Reserve District and Bureau of Engraving and Printing (BEP) facility. US notes are released to one of 12 Federal Reserve Districts, which are identified by a different letter in a seal on the front of the note. These notes are printed at facilities in either Washington, DC, or Fort Worth, Texas; the location can be determined by the presence, or absence, of a tiny “FW” for Fort Worth in the lower right corner of the front of the note.

Many collectors appreciate paper money because of its designs, which can often be quite intricate and attractive. Collections may be extremely diverse, connected only by the owner’s particular aesthetic preferences.

Collectors who travel abroad may also save notes from the countries that they visit. A popular goal is to build a collection that includes one note from every country. Not surprisingly, most people are unable to visit every country, and these collectors rely on paper money dealers who have storefronts, websites or other sales channels to help build their collections. Dealers are easy to find through the PMG Dealer Locator and the Professional Numismatic Guild (PNG), whose members are bound by a strict code of ethics and professionalism.

There are numerous collecting areas, and what someone chooses to collect depends on their interests, budget and other factors. Some collectors prefer vintage banknotes (generally defined as mid-20th century and earlier), others prefer modern banknotes, and there are many who collect both.

Among the most common types of collections:

It is usually beneficial to research any area that you may want to collect. Buy a book about paper money – or go online – to learn as much as possible about the notes that you want to collect before you start buying them. An educated collector almost always makes better buying decisions.

PMG is committed to providing collectors and potential collectors with as much free educational material as possible on its website. There are research articles, a price guide and numerous other online resources. Some of these resources are designed for collectors of all levels, while others are geared for more advanced collectors.

There are many basic and specialized reference books about paper money. For collectors of US notes, Paper Money of the United States by Arthur L. and Ira S. Friedberg is a must-have. Those who collect world notes should consider the Standard Catalog of World Paper Money. The Standard Catalog has different volumes for General Issues (edited by Tracy L. Schmidt), Modern Issues (edited by Maggie Judkins) or Specialized Issues (edited by George Cuhaj). PMG has compiled a list of many other popular reference books here, but this list is far from exhaustive.

Books are a great place to get started – and further your knowledge.

If you do not wish to buy a lot of books, the American Numismatic Association (ANA), which was founded in 1891 and is the only numismatic organization chartered by Congress, maintains a lending library for its members to borrow through the mail. PMG is the official paper money grading service of the ANA.

Hobby periodicals and newsletters can also help keep up with the latest note-collecting news and research. The ANA publishes a monthly magazine, The Numismatist, for its members. Coin World and the Bank Note Reporter are popular weekly periodicals. PMG also sends a free monthly eNewsletter. Subscribe now >

A note’s condition is one of the most important factors in determining its value. An uncirculated note, which has no trace of wear, is almost certainly going to be worth more than a circulated, or worn, example of the same note. The difference in value can sometimes be extreme.

It is therefore essential that collectors fully understand a note’s condition. Originally, a basic system of adjectival grades was used to describe a note’s condition, with additional adjectives added over time. The most worn note was described as “Poor,” while the most pristine was described as “Gem Uncirculated.” Other adjectival grades filled the gaps: Fair, About Good, Good, Very Good, Fine, Very Fine, Extremely Fine, About Uncirculated and Uncirculated.

In the late 1940s, collector, researcher and author Dr. William Sheldon developed a numeric scale from 1–70 to describe the condition of early US cents. Collectors quickly embraced this scale for other coin types and eventually paper money as well.

In 2005, PMG was established to address the significant need for an impartial authority not only to assign a grade to a note, but also to guarantee that the note was genuine. It adopted the industry-standard scale of 1–70 for its grading (See the PMG Grading Scale). 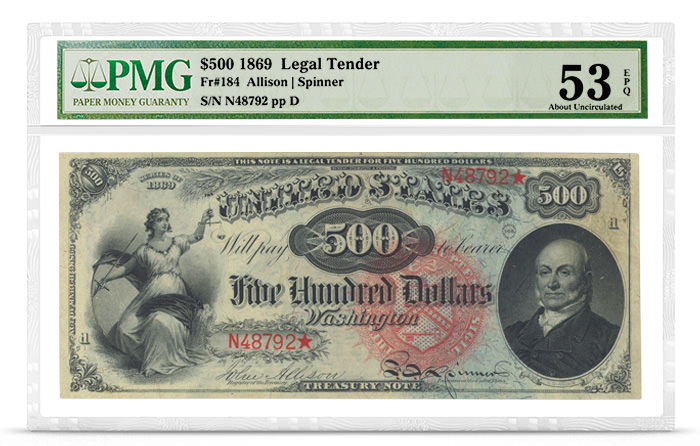 PMG uses a team of paper-money graders to authenticate a note and determine its grade. After the note is authenticated and graded, it is encapsulated in PMG’s secure, tamper-evident holder with a label bearing a description of the note and its grade. Since PMG’s full-time graders are required to be impartial (they cannot buy or sell paper money commercially, or know the identity of the submitter), the grades that they assign are trusted by collectors and dealers around the world.

Notes graded by PMG are also backed by the PMG Guarantee, which provides one of several possible remedies in the rare event that PMG mistakenly assigns a grade that is too high or grades a note that is not genuine. This guarantee, the strongest in the industry, helps to protect collectors and give them more confidence in their purchases. As a result, PMG-graded notes sell for higher prices and have greater liquidity.

Learn more about PMG grading and its benefits >

The paper money-collecting community is vibrant and tightly knit. There are numerous organizations for paper money collectors, including several national ones, and many local and regional clubs. Clubs have also been established for particular collecting specializations.

The largest numismatic organization is the American Numismatic Association (ANA). Founded in 1891 and headquartered in Colorado Springs, Colorado, the ANA publishes a monthly magazine, holds conventions, conducts educational seminars and promotes the hobby. Learn more about the ANA >

Local clubs often hold regular meetings where their members can get together to meet other collectors and talk about paper money. The ANA provides a directory of its member local and specialized clubs on its website.

Another way to meet other collectors and talk about paper money is on the Internet. There are many free paper money-collecting forums and message boards. PMG, for example, has chat boards on its website where collectors can make posts and communicate with each other.