Commemorative Banknotes In Honor Of The Olympic Games

One month before the spectacular Opening Ceremony that kicked off the 2008 Summer Olympics in Beijing, queues lined up around China in wait for an event new to the Olympic Games: the issuance of a commemorative Olympics banknote.

The People’s Bank of China issued the 10-Yuan P-908 Olympics note on Tuesday, July 8, 2008 to a near-overwhelming response. Although banks did not begin exchanging the P-908 for standard 10-Yuan notes until Wednesday morning, queues thousands of meters long had already formed in numerous cities overnight. 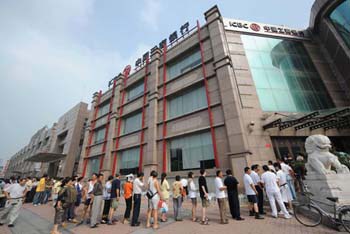 Many branches, even in major cities such as Beijing, Shanghai and Hainan, possessed fewer notes than they could exchange with the massive turnouts. Two-hundred notes were available at the Xuanwu branch of the Industrial and Commercial Bank of China in Beijing, but by 8:30 a.m. on Wednesday, more than 500 people waited outside the bank doors.

The anticipation for P-908 did not end once initial branch supplies ran out. After waiting for hours, some people immediately sold their new notes for more than 30 times face value. Online auction listings topped out at a 9,999-Yuan asking price for the initial week of release. This excitement served as one of many preludes for the success of the 2008 Games.

China P-908 (148.5x72mm) measures larger than P-904 (140x70mm), the standard, 2005-issue 10-Yuan note. P-908’s face depicts Beijing’s National Stadium, nicknamed the “Bird’s Nest” for the mesh of steel supports running along the outside. The Bird’s Nest hosted the Opening and Closing Ceremonies of the games and also makes up P-908’s watermark in tandem with “Games of XXIX Olympiad” in Chinese characters. The red 2008 Olympics “dancing man” logo above the stadium marks P-908 as a commemorative Olympics variety and complements its cyan-green color.

Both sides show a faint background of the Temple of Heaven in Beijing, its triple-eave Altar of Prayer for Good Harvest visible behind the National Stadium on the face. On all notes, eight digits follow the single-letter prefix "J" for the lone serial number, which is found on the face below the stadium.

The note’s reverse features Discobolus, a sculpture of a discus thrower by the Greek sculptor Myron from the fifth century BC. Vignettes of Olympic athletes decorate the center.

In the same way the note heralded the popularity of the Games, the Games reinforced P-908’s legacy. For the 2014 Winter Olympics in Sochi, the Central Bank of Russia issued a commemorative 100-rouble note—the first vertically-oriented note issued by the Central Bank. With a snowboarder on the face and the Fisht Olympic Stadium on the reverse, Russia P-274 bears resemblance to China P-908’s athlete-and-stadium design. The Central Bank decided “to support this tradition” of commemorative Olympics notes, they stated.

This tradition of commemorative Olympics banknotes may continue. With Beijing winning the bid for the 2022 Winter Olympic Games, it becomes the first city to host both the Summer and Winter Olympics. Perhaps this will give rise to the next commemorative Olympics issue banknote, or maybe the brewing tradition that China has started will spread to other host nations before then.

PMG is an independent member of the Certified Collectibles Group (CCG).