During wartime, when soldiers have been captured and kept in POW camps they would find themselves in mini-cities that had their own forms of currency.

Throughout history millions upon millions of soldiers from throughout the world have been taken prisoner and sent to camps during wartime. These camps could offer a high chance of death depending on the country the soldier was fighting for and by whom he was captured. Other times the camps offered an almost peaceful respite from the rages of war. Many times these camps operated as mini cities with a command structure, designated employment and even currency. There are many examples of camps creating their own currency for use solely in the camp, here are a few:

Hay, Australia - Camp 7 Internment Camp In 1940 several hundred prisoners were taken from Liverpool, England and transported to Hay, Australia, a trip that took over two months at the time. These prisoners were considered enemy agents and spies by England and transported there for the duration of the war. In reality the prisoners were refugees (most of them Jewish) who escaped from Axis controlled countries to seek sanctuary. England feared they may be spies and had them shipped to these camps. Camp 7 was an entirely Jewish camp whose prisoners managed to print their own currency for circulation. Pictured below is an example of a six pence note: 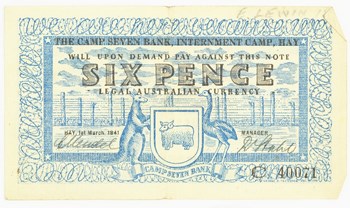 If you look closely at the barbed wire around the border you can see writing. This was added by the designer of the note. It reads “we are here because” repeatedly. In the barbed wire at the center is another message (too small in this picture to see) which reads “H.M.S. Dunera Liverpool to Hay” referencing the ship that transported the prisoners. The notes were designed by George Teltscher and came in denominations of three pence, six pence, one, two and five shillings. Production of these notes ceased less than a year after it started.

1971 Indo-Pakistan War This was the third of four wars to occur between these countries in the last sixty-eight years. This war ended with the creation of the nation of Bangladesh. During this war over 90,000 Pakistani soldiers were held in camps throughout India, although their exact locations are unclear. This was the largest number of POWs taken since WWII. The distribution of these coupons was the first issue of military coupons in post-independence India. These notes are fairly rare and many modern reproductions of them exist. One can find pictures of these and POW coupons from WWII era India in Indian Paper Money by Kishore Jhunjhunwalla.

Lagergeld in Germany During WWI Notgeld, or “emergency money” in German, was printed during World War I when there was a shortage of coins and banknotes. The German state allowed localities to print their own currency to keep up with demand. Some of these currencies were used in POW camps throughout Germany. These currencies were called Lagergeld or “camp money.” Pictured below is an example of a one mark note that was used at Cottbus Camp: 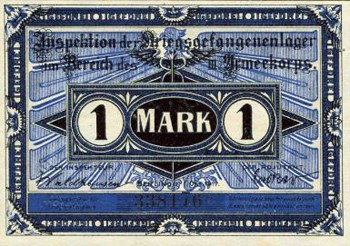 Here is a ten mark note from another camp in Döbeln: 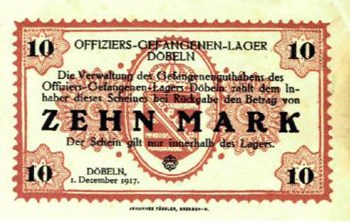 Prisoners were paid meager amounts for doing various works. The lower paid prisoners worked in the farms while the higher paid ones worked in factories and mines. The range of pay was from 16 Pfennigs to three marks a day. It was better for prisoners to be paid in Lagergeld (which could only be used in the camps) rather than state-backed currency lest they acquire enough to bribe the guards to let them free.

There are countless other examples of POW currency from different countries throughout the past century. Despite this currency, oftentimes the most popular form of currency was cigarettes which were viewed as more valuable than any piece of paper. POW currency managed to give prisoners the sense that they weren’t slaves and that their work would be rewarded, making them less resistant to their captors. After all, working on the farm is much better than dodging bullets in the trenches.