The first sheets for the series. Serial numbers 1-4, $1, $2, $5 PMG About Uncirculated 55 America’s Most Famous and Most Ornate Designs Ex Harry W. Bass, Jr.

IRVINE, Calif. — Stack’s Bowers Galleries will showcase the “Educational Note” sheets pedigreed to The Harry W. Bass, Jr. Collection in its official auction with the American Numismatic Association’s World’s Fair of Money. The group comprises three original sheets: the 1896 Silver Certificate “Educational Notes” of the $1, $2, and $5, each with serial numbers 1 to 4. The firm auctioned the group several years ago for the Harry W. Bass, Jr. Foundation, and is honored to present it once again on behalf of its new owner.

The face designs are perhaps the most ornate in the entire series of American paper money. They include the $1 History Instructing Youth, the $2 Science Presenting Steam and Electricity to Industry and Commerce, and the $5 Electricity Presenting Light to the World. The backs are very ornate as well. Each design ranks high in the best-selling book The 100 Greatest American Currency Notes (Whitman Publishing, LLC.) by Q. David Bowers and David M. Sundman.

The bound folio accompanying the notes is titled UNITED STATES PROOF BANK NOTES ISSUED 1896. It includes a typewritten, three-page letter of description and presentation by Claude M. Johnson, head of the Bureau of Printing and Engraving, who had the forethought to purchase the original sheets for himself, and thus, saved them for posterity. Each of the three separate bank note sheets contain four subjects of the represented denomination with serial numbers 1 to 4. The sheets have been professionally removed from the book, graded AU-55 and encapsulated by Paper Money Guaranty (PMG) to protect and preserve quality. 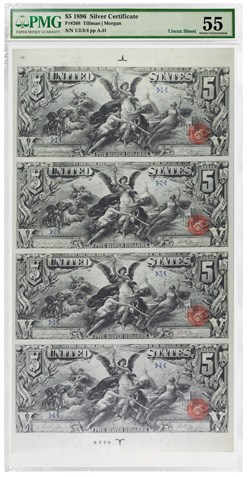 This set was considered by Bass to be one of the highlights of his currency collection. While the archives of the Bureau of Engraving and Printing probably contain many unusual specimens, die proofs, essays and other rarities, usually with no serial numbers or a string of serial numbers, such unusual items rarely are available to collectors. This particular item falls into an even more intriguing category, as the banknotes were produced for regular circulation and are the very first serially numbered. From the content of Johnson’s letter, it is clear that he understood very well the significance of the pieces he owned. The sheets have become much more than the first of the Educationals — they are a monument of history, design and the developmental process. Easily one of the most sought after American paper currency items ever offered for public auction sale, this set will be a highlight of any great paper money collection. The illustrious provenance and pedigree chain will have as its new member, the successful bidder when the hammer falls.

This is a guest article. The thoughts and opinions in the piece are those of their author and are not necessarily the thoughts of the Certified Collectibles Group.