Hungary holds the record as the nation with the most hyperinflation.

Just in time for May 20th (Be a Millionaire Day) I’ve decided to dig deep into the inflation and hyperinflation banknotes of the world. Most would consider hyperinflation notes as those with values of 500,000 or more displayed on the note. However, economics considers hyperinflation as when a country experiences very quick monetary rates on a daily and in some cases hourly basis, or more precisely when the monthly inflation rate is greater than 50 percent. This equates to an item costing 1 unit in January 1 of this year and the following January 1 that same item costing 130 units.

As you can see from the chart above Hungary holds strong as the top nation of hyperinflation - this occurred during Post-World War II. They hold the record for largest inflation rate in one month ever at 41,900,000,000,000,000% (4.19 × 1016% or 41.9 quadrillion percent) in July 1946. This means that their money doubled every 15.3 hours! In comparison to the most recent hyperinflated currency, Zimbabwe, their money doubled every 24.7 hours.

In most every case, inflation or in the the worst case scenario, hyperinflation, occurs after wars, civil or otherwise, coup d'état, or any other myriad of economic unrest. Because of the aforementioned this can trigger hyperinflation due to the government no longer being able to tax its people efficiently while desperately trying to maintain a status quo. Effectively this ‘tax’ is from those who hold their devaluing money, thus the government gains during this period. Some economists would call hyperinflation an extremely large taxation scheme.

The effect of hyperinflation essentially destroys all purchasing power and forces the population to hoard real assets. It doesn’t matter what hard asset is being kept (gold, silver, or hard currency) all hard assets will eventually leave the country. The ‘good’ money will leave the country because the value of the current currency is depreciating at a rapid rate, and in order to combat this people will attempt to move what money they have left into anything else. This puts a hardship on the local economy and the local banks to print more money to compensate for the devaluing of the currency often times leading to more inflation or hyperinflation.

There are at least fifty-three different countries that have gone through hyperinflation which doesn’t include the countless countries that have been effected by hyperinflations little brother inflation, most of which occurred during the 20th century. The United States of America couldn’t escape the cruel grasp of inflation. Once in 1779 when the monthly inflation rate peaked at 40% and another during the Civil War where both the Confederate States and the Union both endured inflation; however, the Confederate currency was virtually worthless towards the end of the war. A major contributing factor as to why the CSA’s currency was near worthless was because the Union produced counterfeit notes to purposely inflate the south’s currency. This was a monumental step in the Union defeating the CSA.

Occasionally a country will revalue their money in order to avoid printing notes with extremely large denominations on them. This way the currency goes from old to new. A good example is when Turkey revalued their currency in 2005. They went from the Turkish Lira to the New Turkish Lira at a rate of 1,000,000 old to 1 New. Another example occurred in 1960 when France revalued their Franc (Fr) to the Nouveau Franc (NF) at a rate of 100 Fr to 1 NF. This system still ended up confusing some of the older population during the 1980s. In 1999 when France turned to the Euro the Franc was worth less than an astonishing eighth of its 1960 value.

The collecting of hyperinflated banknotes is a great niche area for collectors and very rewarding. Here are a few ways to collect these types of notes: Country, War, and Denomination. Collecting by country seems to be the most common and the easiest way followed by war and denomination. Both war and denomination could be rather large sets (depending on the war and/or the denomination). Of course don’t let these three options limit your imagination on how to collect a wonderful area in banknotes.

As a consumer what are we supposed to do when our money goes down the long dark hyperinflated rabbit hole? My solution is to look at our history and mimic those who survived and prospered. No, I’m not talking about buying gold, silver or farming my own food. I’m talking about using that money as toys or as a decorative device.

The pictures in this article were taken in Germany (Weimar Republic – ca. 1923). There is of course more you can do with your hyperinflated – almost worthless money… you can buy a loaf of bread (however, you will need a wheelbarrow to transport the money to the store). Let’s hope that the hyperinflation doesn’t get worse before you get to the store or you may need more cash. 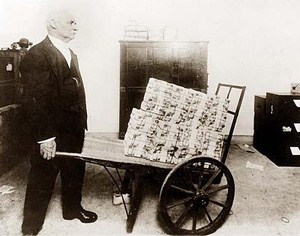 Unfortunately both inflation and hyperinflation are still around and will continue to rear their ugly head from time-to-time. The one positive they bring are great banknotes with outstanding history and often times many zeros. Find your favorite hyperinflation note and become an instant million or billionaire just in time for May 20th. For a great list of hyperinflated countries go here.