Jay discovers a series of books from the 1800s.

Part of my job as a researcher is to build our (already rather large) library with important and informational references. Sometimes these can be small literature reviews while other times they are tomes. If you have a favorite currency book or reference catalog let me know on our forums where my name is JaytheResearcher.

I was just recently introduced to this series of books by a fellow colleague. It was then that I learned of a great series of books about US counterfeit detection. The author was Laban Heath of Boston, Massachusetts. In 1864 he had obtained Congress's approval to use actual Bureau of Engraving and Printing (BEP) plates. That book is entitled Heath’s Counterfeit Detector at Sight it was also the first pocket edition. Heath also published a Banking and Counting House Edition. The last pocket edition (12th) was published in 1878. However, the last Banking and Counting House was released in 1877. This wasn’t Heath’s first book on paper money – that was in 1825 and it was entitled On Paper Money, Its Influence on National Prosperity, and the Happiness of the People. 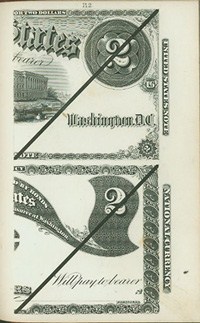 Heath began writing the Detector books so people would have an original impression of a banknote to determine authenticity at sight. Not only would he use the plates to show what a real engraving looks like but he would describe what to look for in a counterfeit as well as the likelihood of a design feature to be successfully counterfeited. Before this book one would use The Bank Note Reporter which would describe the notes in circulation from various banks. It would also give reports on defunct or wildcat banks. Often it would take time for this information to get into the Reporter and by then the damage would have been done. Beginning in 1861 the US began printing money in the form of Demand Notes (Fr. 1-15) followed by the first Legal Tender issues in 1862 (Fr. 16-17, 41, 61-63, 93-95, 124-126, 148-150, 165-167, 183, and 186). Heath saw an opening to inform the masses on the new circulating currency. 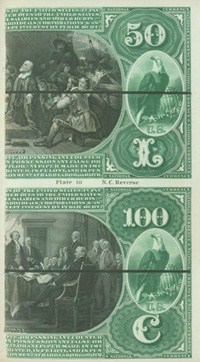 His 1864 book was a huge success selling 25,000 copies. Heath noted in his 10th edition that this number would have been even higher but, new notes were produced (the Greenback and the National Bank Note). In each edition he covered different types of notes; sometimes you will find Nationals and other times Fractionals. In many editions you would also discover vignettes, protectors, and counters. All for the benefit of being able to recognize good authentic engraving.

To my surprise these books are fairly easy to come by in worn condition. Often times all the plates will still be intact which adds to the value of the book. Even if you only wanted a plate (or two) one can purchase those with a quick Internet search. I’m sure if you check your favorite auction house it wouldn’t be long until one came up for auction. To top it all off PMG recognizes and encapsulates Heath’s counterfeit plates.