The collection is significant for its quality, rarity and scope, and includes many finest known examples, special serial numbers, “Star” notes and other extreme rarities. Numerous notes are pedigreed to some of the most important collections of the last century and many have been off the market for several decades.

Pogue, who is also a prominent collector of rare US coins, began collecting paper money in 2003 under the guidance of dealer Larry Hanks of Hanks and Associates, Inc. Their goal is to build a world-class collection of coins and currency that creates a “perfect marriage” portraying the artistic and historical evolution of finance in the United States. The first note that Pogue and Hanks acquired was the very rare 1891 Fr-376 “Seward” $50 Treasury Note pedigreed to the Harry Bass Foundation and now graded PMG 64 EPQ.

Virtually any note in the D. Brent Pogue Collection could be considered a highlight, but several pieces stand out for their rarity and remarkable preservation. The 1890 Fr-377 “Watermelon” $100 Treasury Note graded PMG 63 EPQ is the finest certified of this type, while another Treasury Note, the 1890 Fr-347 “Stanton” $1 is graded an astonishing PMG 68 EPQ. 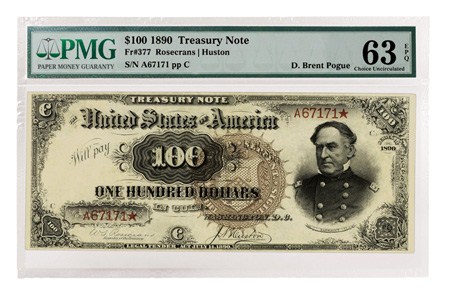 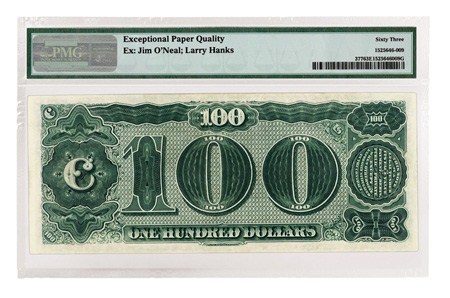 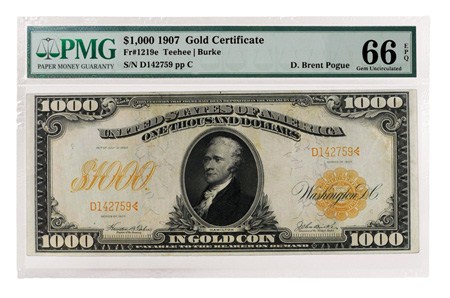 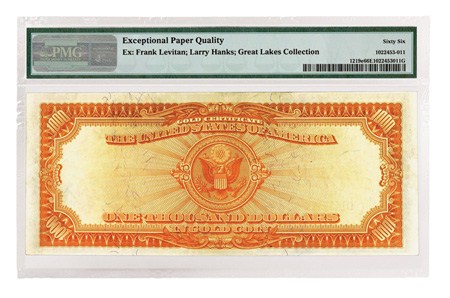 “Although this collection is still growing, we decided that the rarity, quality and value of the notes necessitated that they be certified by a third-party grading service so that we could be assured of their long-term protection,” says Pogue. “I have always considered PMG to be the ‘gold standard’ because of their accurate grading standards, and the PMG holder is both secure and complements the aesthetics of these notes. The liquidity and consistent high prices realized of PMG-certified notes were also important factors in my decision.”

Other significant notes from the D. Brent Pogue Collection are an 1863 Fr-167a “Spread Eagle” $100 Legal Tender Note, the finest known at PMG 65 EPQ, and the 1923 Fr-282* “Porthole” $5 Star Note Silver Certificate in PMG 68 EPQ. A pair of serial number one 1875 $50 and $100 First Charter National Bank Notes, both graded PMG AU 55, are unique as serial number ones for the type and the signature combination of Rosecrans and Huston. These two notes are considered by numismatists to be among the greatest National Bank Notes in existence. 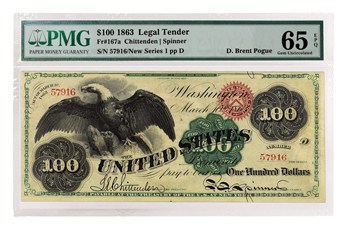 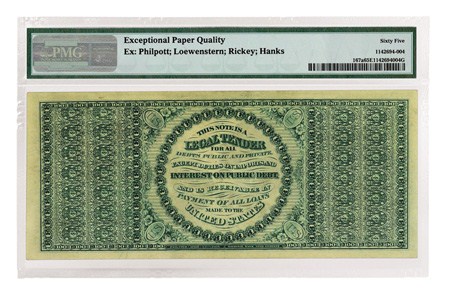 “D. Brent Pogue has an impeccable eye for quality, and his passion for history and rarity was abundantly clear when we were grading these notes,” says Bruce Thornton, PMG Finalizer. “We are honored that Mr. Pogue and Mr. Hanks chose PMG to certify the D. Brent Pogue Collection, and we are excited to know that they will continue to expand and improve what is already one of the greatest collections of US paper money ever assembled.”

An online image gallery of the notes in the D. Brent Pogue Collection will be available on the PMG website in November. Subscribe to the PMG eNewsletter for an announcement when the gallery is posted.