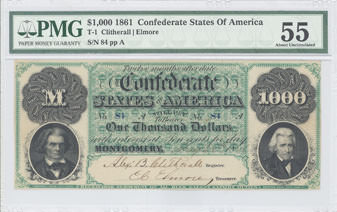 This $1,000 Confederate States of America note is one of 607 issued and features images of John C. Calhoun on the left and Andrew Jackson on the right. Almost all of the Montgomery issued notes were signed by hand by Alex B. Clitherall, Register, and E.C. Elmore, Treasurer.

The Confederate States of America issued their first paper money in April 1861, when the Confederacy was just two months old, and on the brink of the outbreak of the Civil War.

At first, Confederate currency was accepted throughout the South as a medium of exchange with high purchasing power. As the war progressed, however, confidence in Confederate success waned, the amount of paper money increased, and their dates of redemption were extended further into the future. As the war progressed, the currency underwent depreciation and soaring prices characteristic of inflation occurred. This was partly due to the fact that the Union was printing counterfeit Confederate currency. Near the end of the war, the currency became practically worthless as a medium of exchange. When the Confederacy ceased to exist as a political entity at the end of the war, the money lost all value.

The first four Confederate notes were issued from the original Confederate capital of Montgomery, Alabama and they epitomize the highest quality engraving and printing. When the Confederate government was moved to Richmond, Virginia, skilled engravers and printers were hard to come by resulting in a lower quality of notes produced. The Confederate notes designs mainly showcased southern themes including slaves, naval ships, railroads, animals and real historical figures including George Washington and Jefferson Davis. Some early issues also incorporated mythological Greek gods and goddesses. Many variations in plates, printing and papers appear in most of the issues.

Banknotes were ultimately issued in 10-cent, 50-cent, $1, $2, $5, $10, $20, $50, $100, $500, and $1,000 denominations with a variety of designs, issuers and redeemable obligations. At the end of the war, Confederate currency became valueless. Some people destroyed the notes considering them waste paper while other people saved them for sentimental reasons or as a souvenir.

The ultimate amount of currency issued under the various acts of the Confederate Congress totaled $1.7 billion. Bills were released in 72 different note “types” in seven “series” from 1861 through 1864.

Since there were so many types of Confederate notes as well as notes issued by banks and the states of the Confederacy, counterfeiting was a major problem for the Confederacy. Many of these contemporary counterfeits are identifiable today and they can be as valuable to a collector as a real note.