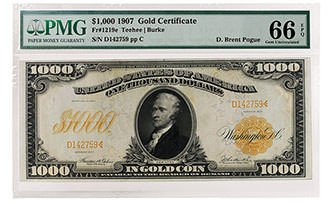 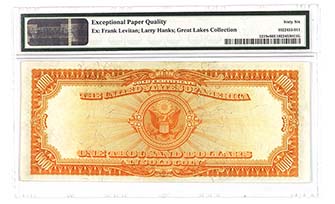 Gold Certificates are always popular with numismatists and this 1907 Fr-1219e $1000 Gold Certificate graded PMG 66 EPQ is an excellent example of why. The vivid color and gold seal are almost as vibrant today as when the note was first printed in the early 1900s. The extremely rare series 1907 $1000 note was printed as part of the eighth issue of gold certificates that were printed between 1915 and 1919. 116,000 notes were printed as part of this issue and they were mainly used in bank to bank transactions and to settle gold accounts. There are fifteen of these notes in the PMG Population Report with this one being the highest graded. Additional examples of this note are held in the Federal Reserve Collections and in the Smithsonian Institution.

This bank note has engraved signatures by Register of the Treasury, Houston B. Teehee and Treasurer of the United States John Burke. Burke had held his position since 1913 when Teehee was appointed to his position in March 1915 and their tenure was completed after the end of the Great War in November 1919.

This note was recently graded as part of the phenomenal Brent D. Pogue Collection. Mr. Pogue, who is also a prominent collector of rare US coins, began collecting paper money in 2003. The collection is significant for its quality, rarity and scope, and includes many finest known examples, special serial numbers, “Star” notes and other extreme rarities. Numerous notes in the Pogue collection are pedigreed to some of the most important collections of the last century and many have been off the market for several decades.