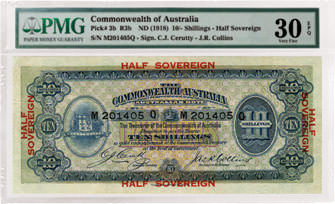 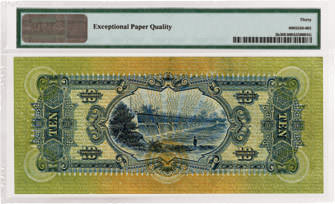 It took some time to establish a unique set of notes and a framework for the issue of the currency notes. To begin the process, the Treasury invited the public to submit designs for the notes, offering prizes of Â£50. The rules for submission stated that designs should not use more than three colors, needed to include the Australian Coat of Arms on the front and Australian scenery on the back.

The Coat of Arms, granted in 1912 by King George V, is the official symbol of the Federation of six States. Up until 1966 it was an important element on all Australian notes.

Unfortunately, the note designs offered by the public were judged unsuitable. The Treasury sought assistance in England regarding note design as well as plate engraving and printing machinery.

By late 1911 a revised note design had been approved.

Although a one pound note had been the lowest denomination used in Australia, the first new currency note produced was a ten shilling note in May 1913. This was followed by denominations of Â£1 to Â£1, 000. In 1914 the ten shilling note was overprinted on the borders with the words “Half Sovereign” to point out that the note was worth the same as a half sovereign gold coin.

This beautifully colorful note is signed by Assistant Secretary to the Treasury C.J. Cerutty and Secretary to the Treasurer J.R. Collins and it carries the imprint “T.S. Harrison Australian Note Printer”. The back of the note features a vignette of the Goulburn Weir in Victoria which was built in the 1880s as part of Australia’s initial irrigation system.